A chorus pedal, that would please ALSO people, who do not generally like chorus pedals. DISCONTINUED

"You really have to max the depth knob to get the liquid crazy stuff of Police records. But even at blend and depth levels where you get blankets of falling water, the Electric Blue Chorus is a tight and complex sounding pedal. And faster speed levels will deliver a cool warbling effect that’s as much vibrato as chorus, depending on how aggressively you use the depth control.

With my rig set up for heavy crunch, Alex Lifeson-style riffs and leads still shimmered through the distortion and splashes of sustaining open string and punchy lead remained clear and remarkably free of treble loss or icky metallic sounds. At the right settings, you might be tempted to leave it on all the time—especially at low volumes where tone fattening rather than chorus effect will be more apparent. With that range of color at hand, the Electric Blue really does have the potential to reshape your perception of what chorus can do. But in a more practical sense, it gives you the means to reshape your sound in fresh ways you might have never expected. And an effect by any name that can pull of that trick is worth a listen."

ELECTRIC BLUE CHORUS - We wanted to design a chorus pedal, that would please ALSO people, who do not generally like chorus pedals.

A chorus effect is achieved by mixing a dry signal with a modulated signal (vibrato, delay, etc.) simulating the effect of more than one instrument playing the same part. Traditionally one would mix a vibrato effect and a dry signal in equal portions to get the chorus effect. This may lead to a metallic quality of sound.

With the EBC “Blend” knob you can adjust the mix of these two and get tones from mild to wild. The Electric Blue Chorus (EBC) uses a sine wave generator for a more pleasing and gentle “liquid wave” sound. It also has a very musical modulation with even stronger chorus settings and tones that lean toward vibrato that sets it apart from most other chorus pedals.

With the “Depth” and “Blend” knobs one can also adjust in a very mild, barely audible chorus that adds some dimension and depth to your tone.The EBC is also very quiet and transparent with very little filtering. Traditionally chorus pedals have had a treble loss, noise, or a metallic tone, especially when used with distortion.

The EBC was designed to be used with both clean and distorted tones and works equally well both in front of or after a distortion pedal. 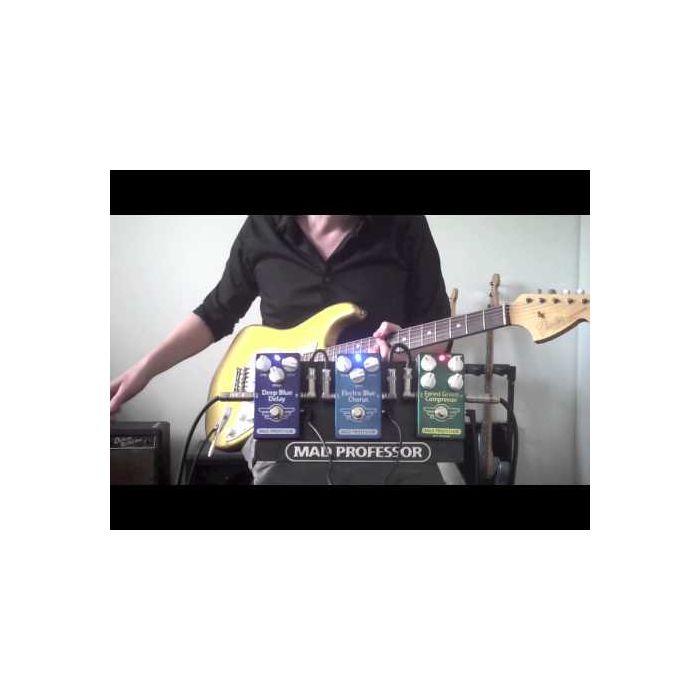