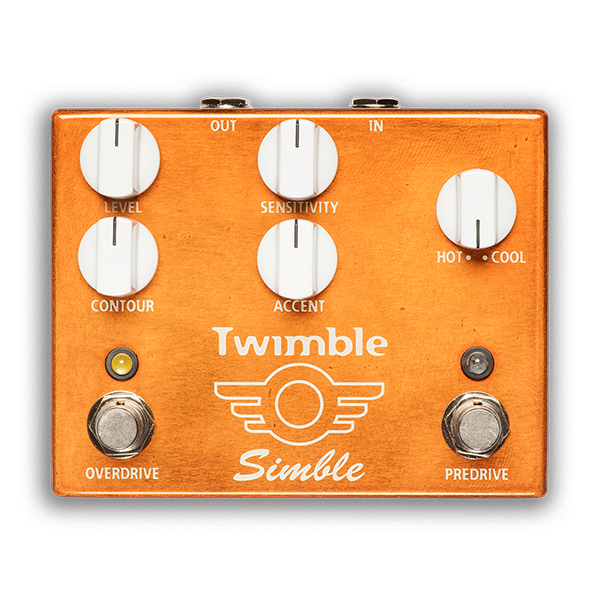 TWIMBLE - Classic Dumble tone combined with a well though out boost.

"The Twimble combines two of Mad Professor’s most successful effects; that being the Simble overdrive and the Simble pre-drive. Combined into one pedal, you’re offered the ability to choose either or both. Used on its own, the overdrive function is throaty and rich — think of that classic Dumble tone — with room to fine tune your frequency with the contour control to taste. Sensitivity determines the amount of gain on tap, while contour works in tandem to effect the pedal’s output. When set correctly, you’ve got enough room here to nail out a distinctive growl that’ll work well for a plethora of genres and playing styles.

With the pre-drive engaged alongside the overdrive, things really start to heat up. The pair work together incredibly well — boosting your guitar’s signal into a killer lead tone that sings. Capping it off, a handy hot and cool control allows you to either reign the effect in or pull it back in depending on how much distortion you’d like to flirt with.

A very responsive pedal, it works particularly well for dynamic players as well as responding nicely to your guitar’s volume. Roll the volume knob back a couple notches and it’ll clean up, with room to move back into those singing leads when you’re ready by rolling your guitar’s volume knob back up. It makes for an organic playing experience, that’ll have you sorted for multiple scenarios."

The Twimble is a combination of the Simble Overdrive and the Simble Predrive. Both of the drives have been tailored slightly in order to achieve an even more organic tonal result. As you turn the contour fully clockwise, you will notice the overdrive section now features enhanced clarity with a sparkling top end. The Predrive section has additional sweet compression. This results in a pedal with a more 3-dimension tonal feel and it is even easier to slide between clean and overdriven guitar tones, which can easily be controlled by your guitar volume. In addition, you will notice more warm sustain to ease playing.

Naturally, both drives sound excellent on their own, on both single coils and humbuckers. And when activated together they really make you flow.

The Mad Professor Twimble pedal allows you to be the foundation of the tone. With the Twimble pedal, your picking attack, your guitar and the pickups you have chosen will retain their character, keeping your valuable original sonic footprint intact.