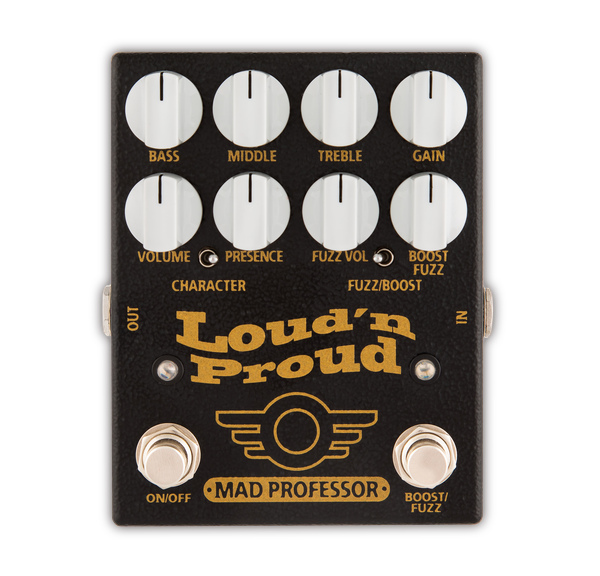 Loud'n Proud is a vintage Marshall in a box with a boost/fuzz.(DISCONTINUED)

LOUD´N PROUD - Best MIAB (Marshall in a box) pedal on the market!

"As you’ll probably know, ‘four-input’ refers to the designs Marshall produced prior to its master volume models that first appeared around 1976 - famously including, of course, the ‘Plexi’-era from 1965 to 1969 when the amps had plexiglass front panels. These amps didn’t have the master volume models’ easy ability to produce driven sounds at quite low volumes; they had to be turned up, so a fair amount of their character came from the output valves being driven. The four inputs fed two independent, differently voiced channels and you could get extra variation by plugging a guitar into the first channel’s upper input, running a jumper cable from the lower input into channel 2, and using both of the volume knobs in proportion.

To create your amp sound, you have controls for gain and output volume, plus tonal shaping via Bass, Middle, Treble and Presence knobs that react just as they would on the real thing. But first there’s a choice, via a Character switch, of a slightly compressed tone with tighter bass, or something with a looser bass end that’s a little less screwed-down and feels a touch more responsive under the fingertips.

Both modes sound great and have the typical crunch of a well-sorted vintage Marshall. We had the pedal plugged into a Fender combo on a clean setting - and also had our own 1969/’70 vintage JMP50 head and a cab connected via an A/B switcher for direct comparison. The Loud’n Proud’s Gain knob runs from clean Marshall tone to fully driven - a more moderate period-accurate distortion than a modern high-gain model, but perfect if you happen to play AC/DC, Cream or Free songs or styles, to name a few, and it all cleans up really well with guitar volume.

For a bit extra, there’s a history of boosters of one kind or another used in front of Marshalls: Jimmy Page’s use of the preamp of an Echoplex tape echo, and Ritchie Blackmore’s Hornby-Skewes treble booster, for example, all of which provided a degree of tonal shift. The booster here offers up to 13dB via the Boost/Fuzz knob but also has some tonal shift, notably bolstering the midrange frequencies that can give you a handy rhythm-to-lead kick-up. If you’ve bypassed the pedal’s drive section, you can use the boost independently to drive your amp if desired, and the same goes if you’ve selected fuzz rather than boost. What you’ll be getting is the sound of classic 1960s-style two-knob (volume and fuzz) germanium fuzz.

Of course, there are more classic Marshall-based tones to be had from putting a fuzzbox in front of the amp - Jimi Hendrix with his Fuzz Face is the obvious example - and the Loud’n Proud pedal can tap right into that, delivering some instantly familiar tones. There’s a whole host of classic rock sounds in this pedal waiting to be discovered.

Let’s just say that the idea of giving you Marshall amp-style drive with the option of a kick-up via boost or fuzz all in one pedal is laudable and that it’s been very nicely implemented here, with the bonus that you can use the boost or fuzz independently. That, however, may be an unlikely occurrence as the drive side of things is unlikely to be bypassed. This is a pedal designed to shape your tone for a specific result and, as such, may very well be an always-on component in your signal chain rather than kicked in for drive when needed, even though it can perform that task admirably.

"The Loud'n´Proud is a 4-input plexi clone-in-a-box! It's about the sounds we’ve heard on the classic rock albums of AC / DC, Cream, Jimi Hendrix, Led Zeppelin and Free for example!

Loud´n´Proud pedal sounds and feels like the amps from late 60´s, the Finns has completed the whole amp signal path - not only the preliminary stage, but also the important power stage parts - simulated. Loud´n´Proud has the exact frequencies that makes your guitar to be heard very well in a band context! And when you switch ON the fuzz too in combination with the amp simulation, the things really starts going on: Here rocks the Lucy! This thing wants to shriek, whine and howl -preferably in minute lasting solos. The overdrive and the fuzz fit really perfect for each other - a dream couple! The booster is the same class too, very handy to give more gas when soloing.

I also played the Loud'n Proud directly into a speaker simulation and then into PA. And yes! Loud´n´Proud can convincingly do that too. The amp-like sound of Loud'n Proud leaves you thinking…, if you have the heavy amplifier, maybe you want to leave that home when leaving to a gig.

Summary: Mad professor pedals are not cheap, but usually worth every penny. Concept, implementation and result are correct with the Finns. Here too: the sound quality is there beyond doubt. The Loud'n Proud has the sound that, has since the 1960s been set in our auditory canals, packed into a compact pedal. If you are a classic rock guitarist, play the Loud´n´Proud into a good speaker simulation and leave your heavy amplifier at home!

The vintage 4-input Marshall, just has that classic and rebellious rock tone we have all grown to love. It helped to define the classic hard rock tones of band and artists including AC/DC, Cream, Jimi Hendrix, Led Zeppelin, Free, Yngwie Malmsteen, and many more.

Mad Professor Loud´n Proud is a vintage 4-input Marshall in a box. It’s a compact pedal with a complete amp signal path replicated inside. Not only the preamp but also the power amp containing phase inverter, push-pull stage, and output transformer simulation. This internal structure makes the pedal not only sound but also behave like a real amp.

And like a vintage Marshall amp, the pedal has a moderate amount of gain. This is what led us to adding a boost/fuzz to this medium gain overdrive circuit. The pre boost has the capability of pushing 13dB, which adds a nice amount of gain to the pedal. It also thickens the midrange a bit so feel free to experiment with the boost also for a different voicing for the overall tone of the pedal. The fuzz is designed to work like a vintage germanium fuzz. By engaging the fuzz you can find a great variety of tones from a clean tone to a thick and warm fuzzy tones just by rolling the guitar volume. The vintage germanium fuzz + Marshall plexi is a classic tone combination that we absolutely wanted to include to the Loud ´n Proud pedal!

You will also find a switch for two different character voicings in the Loud´n Proud pedal: tighter bass and slightly compressed tone on the left with a looser bass including maximum dynamics on the right. If you love the vintage Marshall amp tone, you will also love this pedal. It’s the real deal for those who dare! 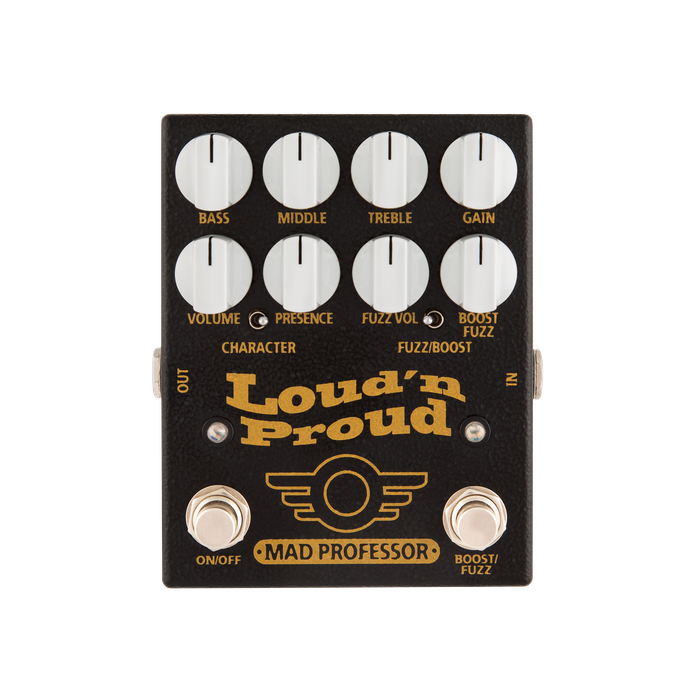