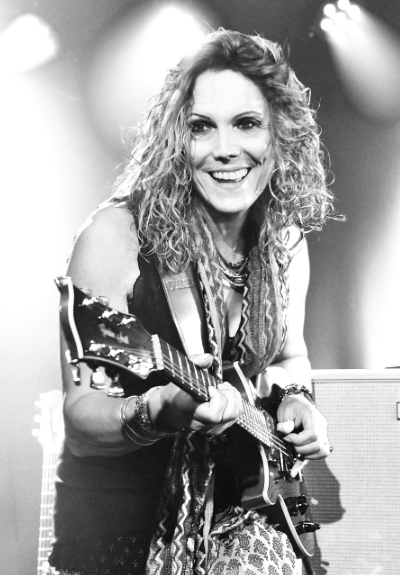 Originally from the UK Michelle moved to Sweden during the 80`s while in the middle of a successful career as a session musician. Michelle toured all over Europe with a number of international artists on either drums or guitar (whatever was needed for that particular tour) often within the country and blues genre, appearing on many of the big festivals and TV shows of the countries that she was touring in at the time. During the 90´s she released a couple of albums (under a different artist name ) and had a song climb to #6 on the European country charts and was later inducted into the swedish nostalgia rock n roll hall of fame in 2013.

Michelle continues to do live session work with various bands and artists and performs regularly under her own name either with her blues band, as a solo artist or a number of other constellations. Michelle gets a lot of attention for her unusual playing style which is a kind of bluesy rocky country picking…. but that’s not the “thing”…. She does it while holding and playing the guitar left handed, but she actually has the guitar strung right handed, unlike Hendrix who simply restrung his right handed guitars to left handed as most lefty players do.

“Im left handed and when I was young I lived out in the country. I had a beat up nylon strung guitar which I turned upside down and taught myself to play on that. This was in the days long before the internet so I didn’t know that I was doing anything “wrong” and that really I should swap the strings around. It wasn’t until a year or so later that I met a “real guitarist” that told me I was playing it the wrong way around, but by that time I decided that I’d come too far to change, and so I just continued this way”.

During Michelles 34 years in the business she has either owned or used many different brands of pedal on stage and Mad Professor pedals have always been a constant addition to her pedalboards since she discovered them a number of years ago.

“ I discovered Mad Professor Royal Blue Overdrive thanks to Matts Schofield and simply loved its transparency and responsiveness, they are solid and reliable pedals with great tones. Many people go out and buy a great guitar and amp and get their favourite tone set and then they put a pedal in front of it which then changes the tone completely. Ive never understood that concept and always want to keep my original ground tone and then add a flavour or spice with a pedal. The Royal Blue Overdrive does this perfectly and is why its been a constant on my boards even after trying a lot of other pedals over the years. These days I have two Royal Blue Overdrives. I have a number of pedalboards scattered around between home, rehearsal rooms, studios and friends houses! The other Mad Professor pedal that Ive used for a long time is the Deep Blue Delay. I have two of these too, and on one Id set a kind of slap back repeat, and on the other Id have a longer repeat for more overdriven solos”