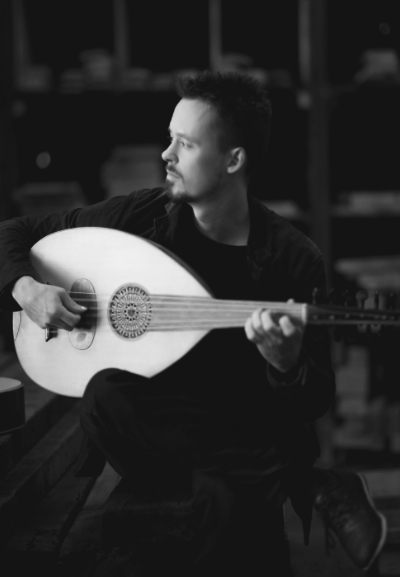 Born in Rovaniemi, a small town on the Arctic Circle in Northern Finland, fretted/fretless guitarist and oudist Jussi Reijonen is truly the product of a world without frontiers.

Having grown up moving back and forth between Finnish Lapland, the Middle East, and East Africa and currently living in Boston MA, USA, Jussi has spent his life soaking up the sounds, scents and shades of Nordic, Middle Eastern, African, and now American culture, all of which are reflected in his music.

Reijonen’s original music draws from a wide pool of influences and experiences gathered on a life journey living on four different continents. In both his original compositions and his playing, the open spaces and silences of Northern Finland effortlessly rub shoulders with the maqamat of the Arab world and the rhythmic richness of Africa and India, creating a truly unique and enchanting musical mosaic.

Along his path, Jussi has worked as bandleader, sideman, composer or arranger with numerous front row artists, and has performed extensively in the United States at prestigious festivals and venues like Lincoln Center and the Library of Congress, as well as in Finland, Sweden, Latvia, Germany, France, Lebanon and Canada. He has had the honor of working with Jack deJohnette, Dave Weckl, Pepe de Lucía, Javier Limón, David Fiuczynski, Simon Shaheen, Bassam Saba, Arto Tunçboyacıyan, Louis de Mieulle / Matt Garstka (of Animals as Leaders), Hüsnu Şenlendirici and the New York Gypsy All-Stars, Bruno Råberg, The New York Arabic Orchestra, Finnish Idol winner Ari Koivunen, and multi-platinum-selling Finnish-Portuguese vocalist Anna Abreu, among others.

He is currently composing his next album as a leader, co-leading world music quintet Sawaari, and working as a sideman with Swiss vocalist Gabriela Martina, Southern Italian folk ensemble Newpoli and various others.